Mission of the Sheriff's Department 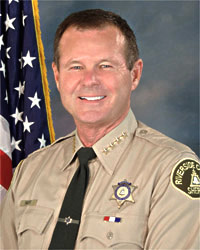 Stanley Sniff, Jr. has served as the 13th Sheriff of Riverside County since October 2, 2007. He was subsequently re-elected in 2014 to a second full 4 year term. He is the third Sheriff to also serve as Coroner-Public Administrator after that Department was merged in 1999. The Riverside County Sheriff ’s Department was created in 1893 and is the third largest Sheriff ’s Department in California with 4,600 full-time staff and over 1,600 volunteers. He oversees countywide patrol operations, jail operations, court security and coroner investigations. The department has an operating budget of nearly 700 million dollars for the current fiscal year.

Sheriff Sniff has over 4 decades of law enforcement experience and is the eldest grandson of one of the pioneering date and citrus families of the Coachella Valley and grew up in the Indio area. His father, the late Stan Sr., served 25 years as a La Quinta City Councilman. He joined the Coachella Police Department in 1975 after graduation from the San Bernardino Sheriff ’s Academy and then transferred to the Riverside County Sheriff ’s Department in 1979, initially assigned to the Indio Station, serving across the Coachella Valley. His initial expertise was in traffic enforcement and accident investigation and he was instrumental in creating the department’s very first specialized traffic safety programs. He has held subsequent assignments in uniformed patrol operations in Riverside, the San Gorgonio Pass area, and Southwest Riverside County. As a Captain he held command assignments of the Robert Presley Detention Center in Riverside, the Banning Sheriff ’s Station and the Ben Clark Training Center. As a Chief Deputy he held assignments over Training and Personnel, East and West county patrol operations. As an Assistant Sheriff he was assigned oversight of all county court operations, jail operations and patrol operations divisions. A retired colonel in the Army Reserve, Stanley Sniff was commissioned as an Armor officer out of the OCS program in 1973 at the U.S. Army Infantry School, Fort Benning, GA. He served 30 years in a variety of military staff and command assignments in infantry, armor and cavalry units.

The US Elections: Results and Implications for the Economy and Markets